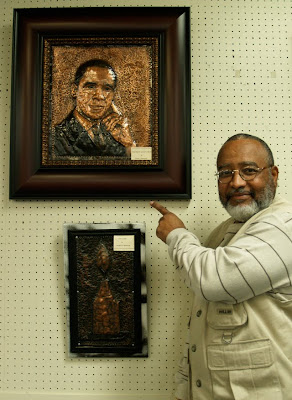 Yussuf J. Simmonds points directly to one of the copper works of art he has recently created which honors our President Barack Obama. Below the image of Barack Obama, Yussuf Simmonds smiled humbly to show me how his son Stephen Simmonds whose copper art is below the Obama portrait, has also followed his father's artistic path in the making of copper artworks. Photograph by Ginger Van Hook. June18, 2010 Inglewood Library, Inglewood, California.
An artist working with the medium of copper, Yussuf Simmonds has spent over 40 years developing his style and his talents which are now on exhibit at the Inglewood Public Library throughout the month of June, 2010. 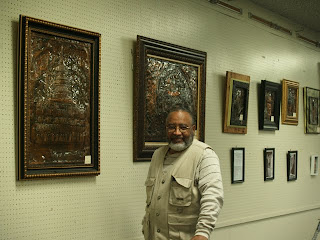 In his artist statement, Simmonds, the artist, father, writer and community leader reveals the love of his artistic nature and his support for artists within the community:
Yussuf J. Simmonds
Master of Art in Copper
For as long as I can remember, I have always enjoyed some form of art.  I started with regular pencils colored pencils and water colors, and then moved up to oil painting.  I was a teenager when I met an elderly man who made pictures (raised/embossed and sculpted) from sheets of copper, and to a lesser degree, with aluminum sheets.  His skill was a unique form of art that I had never seen before.  To be able to draw was an asset but it was not mandatory in championing the skill.  He referred to it as “copper work.”
Just watching him work, I learned the basic skills and when he realized that I was interested, he began to teach me.  He taught me figures and faces (profiles), still life and movable objects.  I learned some different methods of drawing and tracing via carbon paper onto the copper. 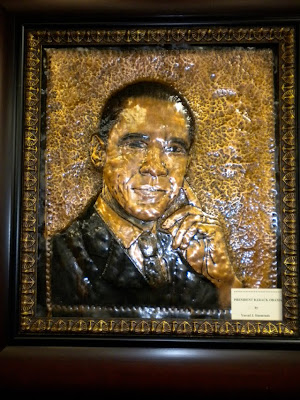 An important part of mastering the skill was making my own tools.  The idea was because I made them myself, I would be more proficient using them.  They would be an extension of my artistic skill.  Next was heating the copper to facilitate the raising process; then cleaning the finished product with acid, water, a scrubbing-brush and ajax.  Coloring it entailed two processes: oxidation (blackening it)with potash/liver of sulphur and erasing portions of the copper from dark to shades of bronze depending on the tone desired.  The final act was in lacquering the finished art work to achieve a glossy and protective coating.  (Painting the finished product was always discouraged as it would have defeated the purpose).
I sold my first copper picture to a doctor who told me that to refine my skills, I should travel to the University of Mexico or Paris where I would receive “post graduate” art training.  This was in the mid-sixties and it did not fully register.  I began to produce copper pictures “en masse” to be sold to tourists and orders from individuals and companies/businesses.
Displaying copper (work) art was relatively easy in that it triggered an immediate connection with viewers.  Though they may have understood or even appreciated the subject matter, the process and the end product was/are always mind-boggling.  It is unique as it is different.
Despite the fact that copper art is not as conventional as pencil, charcoal and paint, the historical significance that it generates is beyond the imagination.  (The craft came with me from Trinidad back to the Virgin Islands, to New York and Los Angeles, California where I have produced pictures for over three decades. 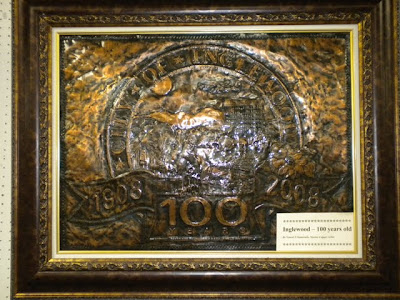 Though I have attended California State University, Los Angeles
Trade Technical College and have taken off-campus (correspondence) courses from the University of Calif. Berkeley, and Delta College, Stockton, California, I have never had any formal academic (class-room) art training.  However, on a trip to Puerto Vallarta, Mexico in 2006, I came across some copper and aluminum art that were similar to what I do and realized that was what the doctor, who purchased my first picture was telling me 40 years ago.  I have also met an African artist who does similar art work. 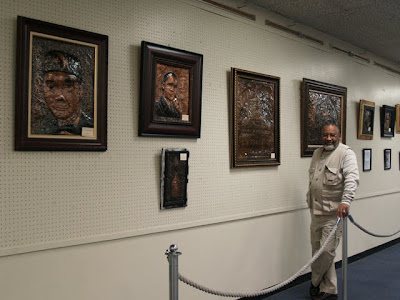 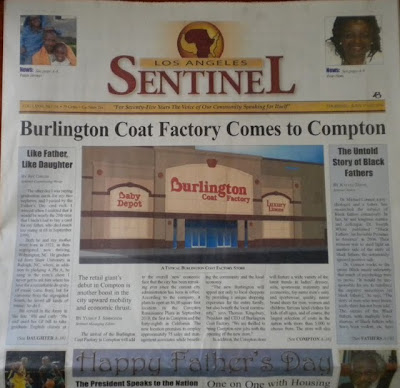 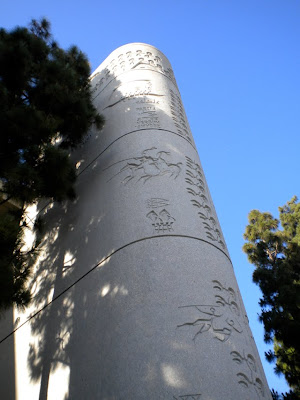 The Inglewood Public Library now exhibits fine art in the lobby
of the first floor throughout the year for the public to enjoy.
Inglewood Library photos by Ginger Van Hook, June 2010 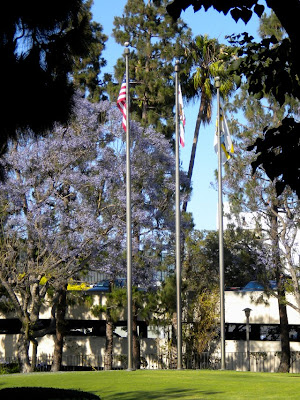 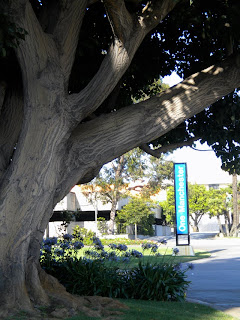 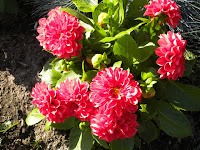 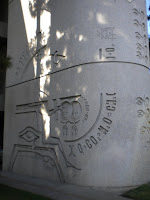 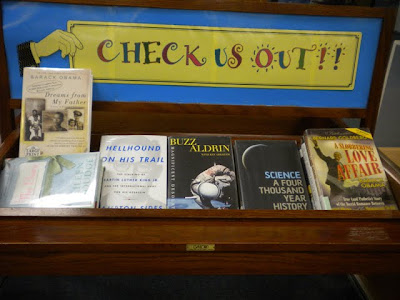 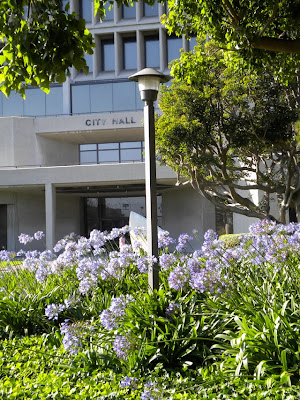 Inglewood Public Library is located in the same plaza as the Inglewood City Hall building. The landscape and architecture of the Inglewood Plaza has been designed to incorporate green space around all the buildings, with parking within the center of the plaza. Additionally, colorful blooms of flowers adorn the walkways and the bridges which join one building entrance to another.
Photographs by Ginger Van Hook, Inglewood, California June 2010. 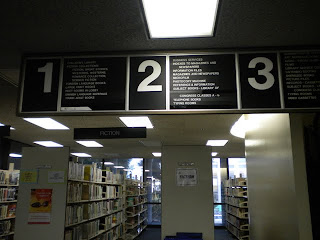 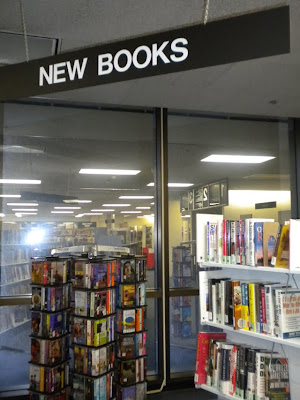 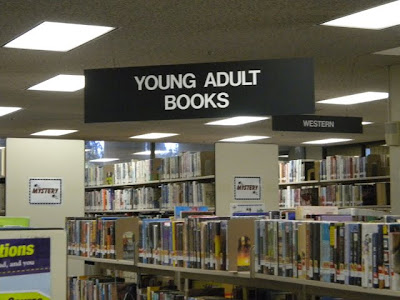 The Inglewood Public Library contains a very large variety of books to assist its young patrons with research in fiction, non-fiction, westerns, dramas, poetry, literature, new genres, and as well as young adult series and children's reading areas. Getting involved with your local library in Inglewood or your own local community in any of the surrounding areas, provides for families, children and adults the foundations of a valuable education. Most libraries are equipped with computer terminals for research and continued study, before, during or after school gets out.  Learning is a lifelong achievement. Let your local library show you what's available, today!
Posted by Ginger Van Hook at 4:05 PM No comments: 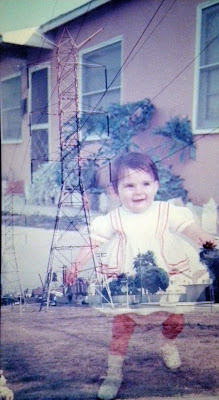 The Ghost of my Sister Else (23" x 42")
Traditional Darkroom Photography, Negative Sandwich
Artists: Ginger Van Hook, Luke Van Hook, Luis Ingels, (photographer and Dad)
Original negative image taken in 1965 by Luis Ingels,
Power lines image taken in 2010 and merged in the darkroom by
Ginger Van Hook and Luke Van Hook.
Location: SouthGate, California. Southern & Dudlext street across from SouthGate Park.
Photograph image of Original Power Towers that we lived under as a family
between 1964-1966
My work in photography investigates how to make the invisible, visible.
Electromagnetic Fields are an invisible force on our planet that is created from the generation of electricity through high voltage power lines just to cite a particular example. So too, this force exists in smaller quantities in microwave ovens, TV’s, computers and electrical appliances. At first this type of radiation was not well understood, nor how it affected the human psyche, the brain or the body. I began investigating the issue of High Voltage Power Lines at first because of its unique visual relationship to me. In 1964-1966 when my family arrived in Los Angeles from Argentina, we lived in Southgate, California and we rented an apartment about a few feet from a row of high voltage power lines. I always thought these enormous power structures were beautiful; an elegant testament to man’s ambition to conquer the night.
Later, I found new reasons to investigate the issue as I began to learn of the powerful electromagnetic fields that were associated with this technology. The issue is also personal as my sister had developed Leukemia and died in 1975, but no known cause was ever attributed to her death.  When I learned of the connection between High Voltage Power Lines and childhood Leukemia I started investigating this issue with even deeper conviction, photographing Power Towers between California and up into Oregon.
The question of how electromagnetic fields affects the brain, the body and the psyche are the subject of now a lifelong study looking for my own personal answers.  I seek to demonstrate to the public, the art world and to my family that an invisible force is still active, even when it cannot be seen or perceived by the human eye. Just as I had worked in the radio business for 15 years and learned sound waves were able to be captured and heard on a receiver to broadcast music, so too, I wish to explore the visual impact of electromagnetic radiation as it applies to the perception of the public mind, the brain, the body and the psyche.
I believe my work would be of particular interest to Prof. Shinsuke Shimojo of Caltech because I too seek the connections between hidden links in my photographic work. I too study the associations to my childhood memories, how the public perceives these issues and the emotional states that are a result of invisible forces in our environment.
In my work I also wish to acknowledge the collaboration with my husband and Gallery 825 --Los Angeles Art Association Member, fine arts painter, Luke Van Hook with his assistance on road trips, support with equipment and creative consultation through several states to obtain the extensive collections of Power Tower and Power Lines photographs as well as the generosity of my father, inventor, Luis Ingels for allowing me the use of our childhood negatives for me to cut up and create images of double exposed negative sandwiches resulting in powerful views of High Voltage Power Lines seen through the lens of my childhood memories. My work involves darkroom techniques with double negatives sandwiched together like the work of Jerry Uelsmann including double and triple exposures as well as digital imagery created on the computer.
I have an Masters in Fine Arts in writing and photography from Otis College of Art and Design in Los Angeles and a Bachelor’s degree in Communications/Journalism from The Annenberg School of Communications and Journalism at the University of Southern California. Luke Van Hook has a Bachelor's degree from Otis College of Art and Design in Los Angeles in Fine Arts Painting. The focus of Luke Van Hook's current work is the exploration of the circle in all its diverse manifestations. Luke Van Hook mixes all his own paints to create unique color combinations on canvases and panels. His work may be viewed on his website: www.lukevanhook.com
(Scientists from the Jiao Tong University School of Medicine in Shanghai announced the results of their research that finally explains just how EMF radiation causes childhood leukemia.  Xiaoming Shen and his colleagues determined that the distribution of leukemia among children living under high voltage power lines or transformers is not random; rather, it affects children carrying a certain genetic variant, that is, the ability to repair DNA breaks vastly more often. This simple sounding finding has huge implications. Researchers have long thought that EMF radiation caused DNA breaks, but could not figure out how. Shena’s research points to a different mechanism; the EMF radiation doesn’t cause the breaks, but inhibits DNA repair, particularly in children that have a weakened repair mechanism to begin with.)
http://spectrum.ieee.org/techtalk/semiconductors/devices/powerlin_radiation_and_children posted by Tekla Perry//Tuesday, December 16, 2008. 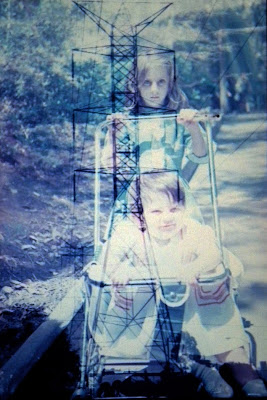 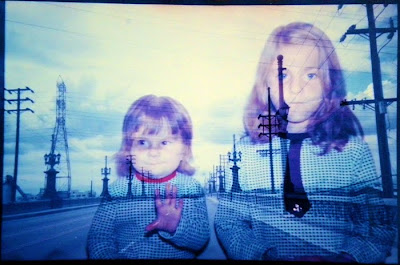 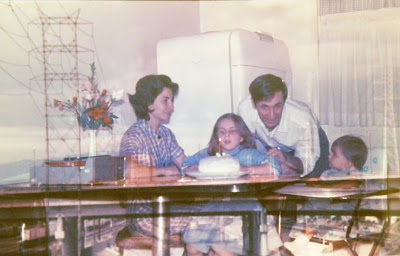 Exposed to Power (22" x 40")
Traditional Darkroom Photography, Negative Sandwich
Artists: Ginger Van Hook, Luke Van Hook, Luis Ingels, photographer (and Dad)
In the original image taken in 1965, there is my mother Martha Ingels, my father Luis Ingels,
and my middle sister Else Ingels depicting the family celebrating Else's first birthday.
Else was born in 1964 and died of Leukemia in 1975.
Southgate, California. Southern & Dudlext streets, across from SouthGate Park.1965.
The images of powerlines in the background are taken in Los Angeles, California
over the downtown freeways in 2003 and this final image was created in the darkroom using two negatives in April 2010.
Posted by Ginger Van Hook at 11:31 AM No comments: