LOS ANGELES, CA –Fine Artists in Inglewood will open their studios to the public the weekend of November 12-13, 2011 from 1:00pm to 6:00pm during the fifth annual Inglewood Open Studios tour. The event, hosted by Inglewood artists and nonprofit Inglewood Cultural Arts (ICA), will allow visitors to personally tour the studios of established and emerging artists working in drawing, painting, sculpture, mixed-media, photography, installation, and performance. Two historic public artworks in the City of Inglewood will be stops on the tour; The History of Transportation Mural by Helen Lundeberg and The Written Word Intaglio Tower by Tom Van Sant, both of which are located at the Civic Center in Inglewood on Manchester Blvd.

In addition to the tour, Inglewood Open Studios also features a group show, which includes work by all participating tour artists, at the gallery within the Beacon Arts Building from Saturday, November 12 through Saturday, November 26, 2011 with an opening reception for the exhibit on November 12, 7:00-10:00pm. The group show will be on view for 2 weeks during normal business hours: Thursday to Saturday 1:00pm to 6:00pm and Sunday 1:00-4:00pm.  Beacon Arts Building (http://www.beaconartsbuilding.com / 310-419-4077) is located at 808 N. La Brea Ave., Inglewood, CA 90302.  The City of Inglewood will provide free shuttle bus service, which will run in a continuous loop, to the attending public on both Open Studios tour days. Printed maps with Open Studios location details are available online and will be at each artist's studio and at the gallery on both tour days. For additional information on Inglewood Open Studios, including the printable tour map, please visit www.inglewoodopenstudios.com and http://www.facebook.com/event.php?eid=164011226949989#!/event.php?eid=164011226949989.

Inglewood, CA -
Inglewood is bordered by the LAX International Airport and surrounded by the nearby cities of El Segundo, Playa Del Rey, Marina Del Rey, Westchester, Culver City, and Torrance -- nestled in the center of Los Angeles County.

For additional information, please contact press liaison Ginger Van Hook at enilde@sprintmail.com or visit her website at www.gingervanhook.com and visit her blogs at  http://gingersartjournal.blogspot.com/ & http://finearttrekkinInglewood.blogspot.com 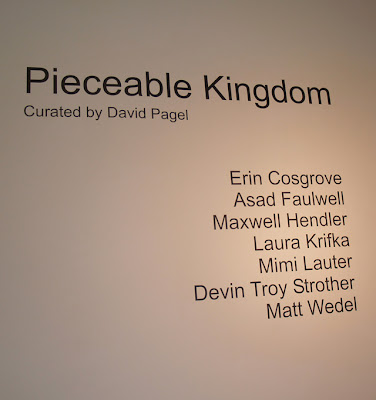 Being in sync with the universe is often a luxury, but in a curious way, the exhibition Pieceable Kingdom which opened on Saturday February 5th, 2011 is demonstrably in sync with what is going on with the art culture of the world. The show is the third in a series coined "Critics as Curators" by Gallery Director Renée Fox who is the new force to be reckoned with in the art scene of Inglewood where she managed to inspire a developer to open a new art gallery. This new Gallery called Beacon Arts Building is located in the center of Los Angeles County, California about five miles from the LAX Airport; through which guests arrive and depart to their destinations around the world from the Pacific Rim.
In light of a new revolution of democracy erupting in the Middle East, this exhibition opened and reveals a wonderfully diverse voice and collection of imagery which propels our melting pot of community into the flavor of change.  David Pagel, the renowned curator, artist and writer based his show on the term Pieceable Kingdom, while playing with the spelling of the word Peace. Additionally collaborating with the artists on the planning of the artwork that is forged from the very distant "Biblical" past and merging it with the contemporary world we live in, Pagel dug deep into the fabric of American Philosophy and managed to reveal a unique recipe for harmony.
The cover piece created by Laura Krifka titled "Mine Eternal" is an oil on canvas 48" x 96"inches and hangs impressively in the center of the gallery, surrounded by some of her unique miniature sculptures nearby on three pedestals. The image is truly an image of luxury whereby the two lovers lounge in a bed of pink roses in the center of the forest. The male is resting his head on the female's bosom reminiscent of Greek statues. The female wears a luscious flowing maroon gown with blue and white stripped petticoat and a low cut strapless top which reveals her naked shoulders. But none is more naked or anatomically correct than the image of the male who is completely nude, eyes closed in eternal bliss. Yes, here the male is a bit feminine. It seems to reveal a switch in the culture of the sexes as usually it has been the female who is naked and laying in the arms of her male lover. Here is where Laura plays with our gender roles of the present. And she doesn't stop there. Her miniature sculptures are just as anatomically correct and naked and just as reversed in their roles as parents, caretakers and nurturers.
Her females in the sculptures appear to be turned on their heads, petticoats showing, children naked catching butterflies in the wind and clutching the father who sports an injury to the leg, blood seeping from his wound while he supports his wife, who appears to have a smile on her face and dressed to do the can-can dance.

Posted by Ginger Van Hook at 11:19 PM No comments: