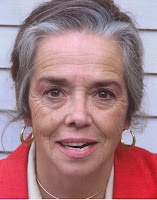 Hi, it’s me again – Anne Cheek La Rose – guest reviewer.  As usual, we can’t have Ginger or Luke Van Hook review their own works on exhibit, so here are my thoughts!
“SeeThru” at Gallery 825, is a collaborative effort between science – Professor Shinsuke Shimojo of California Institute of Technology – and art.  It was fascinating to me.  Since I knew nothing about the science end going in, I had no clue what to expect.  It’s a huge exhibit with 22 segments.  Ginger and Luke were involved in seven of the segments, and frankly, their work was the part that I believe the layman could most relate to.  Everything was magical and very interesting, but some of the science behind the artwork is just too complex for mere mortals to comprehend.  The exhibit is based on Professor Shimojo’s work with how the brain processes information with respect to how we visually perceive our world.


As one enters the gallery, there is a very large mobile featuring fragments of a whole photo.  This is meant to expose the sighted person to how the world is “seen” by the unsighted person.  At first one tries to mentally pull all the fragments together to create the whole photograph.  Within a few seconds or so of a back-and-forth visual jigsaw puzzle, one realizes some fragments are missing.  Voila!  We “see” as the unsighted “see”.  Very effective.  This work is by Dori Atlantis, Ching-Ching Cheng, Meg Madison, and Mei Xian Qiu 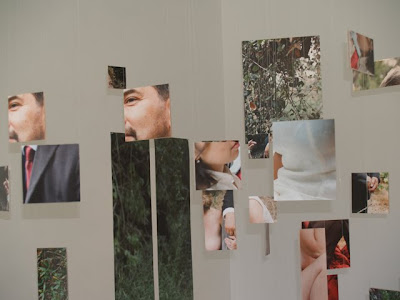 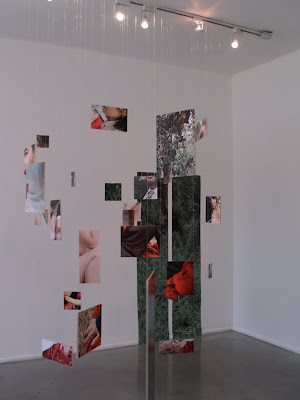 “Brain Projector” is based on a traditional Japanese rotating lantern.  This is, perhaps, the one piece of the exhibit that would readily fit into a home environment.  It investigates the visual cortex and gives a glimpse into how the brain processes information.  It’s not a small lantern but commands the space of a good-size table lamp.  Perhaps I was drawn to this because it is colorful and projects shape in colors on the wall as it rotates.  The Van Hook’s did a lovely job and I hope this work will be part of the Fourth Annual Inglewood Open Studios tour this November. 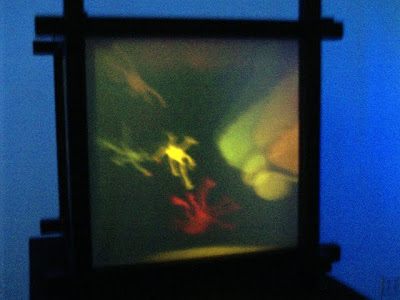 "Brain Projector" created by Ginger and Luke Van Hook
at the request of and in collaboration with Professor Shinsuke Shimojo who states
"The surface of the visual cortex, as well as the lateral geniculate nucleus
(LGN) which is the relay part between the retina and the brain,
are organized topographically with regard to the visual field.
That is, the visual world is "projected" onto the cortical surface...
suddenly it occurred to me that we may steal the idea from  traditional Japanese lantern.
I immediately wrote to the artists, who then replied to me with their enthusiasm!" 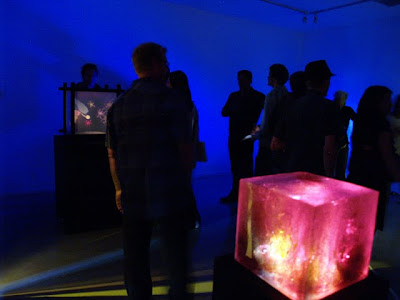 To get to the room with the lantern, one must walk through “Science and Surveillance”.  This was a microcosm of the surveillance apparatus that we experience in our lives.  I found it disturbing because until one is confronted with all this in one place, one simply dismisses it as part of daily life.  However, out of the usual context, I found some of the associated signage to be somewhat comical.  This exhibit was created by A.M. Rousseau. 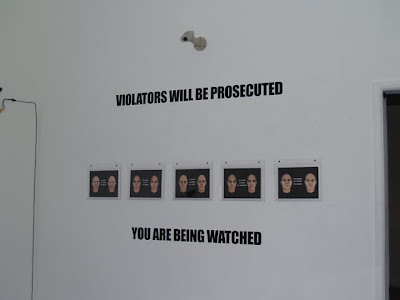 I also liked “The New Zodiac” by Siri Kaur with Romann Weber and Daw-an Wu.  This was a series of six faces of Politicians and six Bunnies.   This explored how we first view a person who is new to us.  The photos were covered with a solid color and, as if the viewer’s eyes were laser pointers, the image was revealed.  In five seconds or less, the accompanying materials tells us, we first look at eyes, mouths, breasts (some things never change), and flesh.  I tried my own experiment, and yes, I went straight for the eyes.  Further noted in each photo are the spots we look at behind the initial ones.  These are shown as tiny laser-like lines trailing off in all directions with dots at the points the viewer lingers momentarily.  This all gave the photographs an abstract graphic quality.  I’d like to have the opportunity to sit at the machine that produced these images to create one of a loved one.  Could be a new business model. 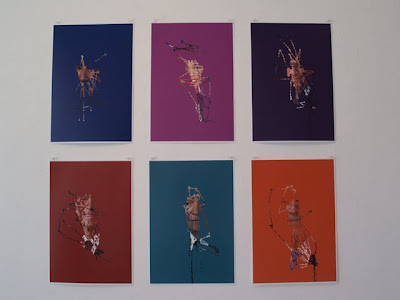 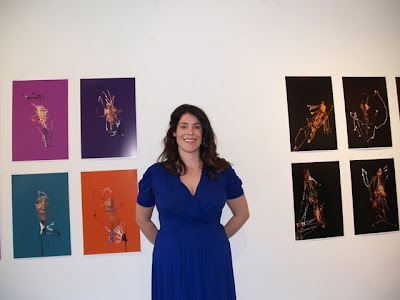 “The Opposite of Love” is a two-photograph work by Mei Xian Qui.  The same woman is shown in both photos and the only immediate difference is that in the hand thrust forward in one holds flowers, and in the other a gun.  The question here:  is the woman’s expression the same in each photo?  I looked long and hard and tried to imagine myself presenting both items.  My expressions would be different, depending on the item, but I could see no difference in the expressions between the photographs.  Interesting study. 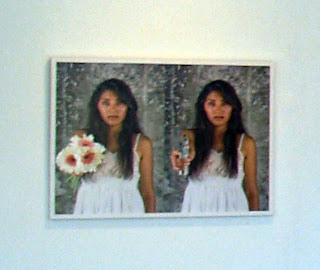 The Van Hook’s also did a piece called “Brain”.  It is formed from mirrored plexiglass, LED diodes, and batteries.  The life cycle here is noted to be approximately five days.  A ‘birth’ notice was published in a local paper and a ‘death’ notice will be published when it dies.  I didn’t get it . . . or maybe I did, but it sure was pretty. 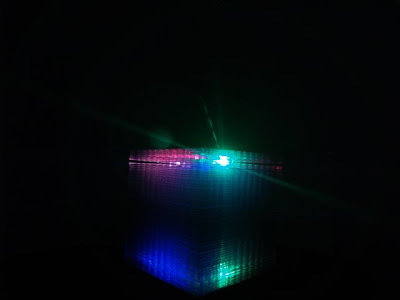 The "BRAIN" is a brainchild of Luke and Ginger Van Hook who gave this idea life by
putting a birth notice in the LA TIMES Newspaper.
According to Professor Shinsuke Shimojo of Cal Tech, The brain, or the CNS (Central Nervous System)
is differentiated very early in the prenatal period, which is very well identified
and described including the genes and the cascade like processes triggered
by them in developmental biology.
Until very recently, it has been believed that no new neurons are born or created after the birth.
Several major discoveries in the last decade may argue against that. 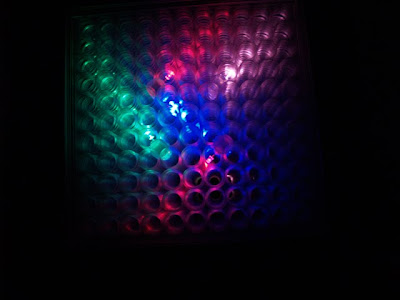 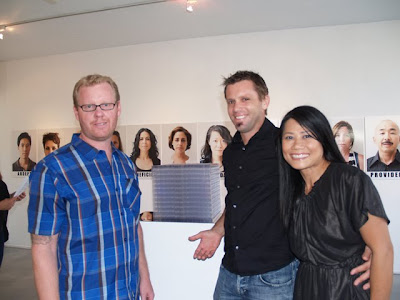 Luke Van Hook stands beside the "BRAIN"
with his friends and supporters Jason and Madeleine Golaboski.
“Revealing the Invisible” was a hands-on exhibit by the Van Hooks, to show exactly where on the receiver end of a cell phone the magnetic field is located.  While I was there, several people, using different makes and models tried it out.  Some emitted a greater field than others.  I’ll never know, as I left my phone home that evening.  But, the new, iPhone emitted a greater magnetic field that the older model.  Perhaps this is a clear case of ‘newer isn’t better’. 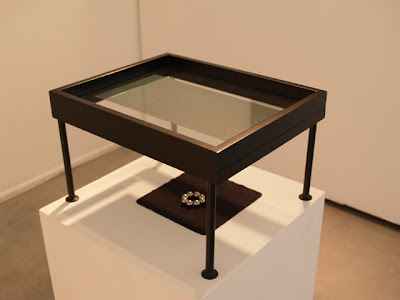 The one segment that I found most profound was the “Electromagnetic Fields – First Steps and Electromagnetic Fields of Memory”.  This is a study of the enormous triangular towers that hold multiple lines.  We’ve all heard the stories of how these electromagnetic fields can affect humans.  Most can come up with an anecdotal story or two, or find living so close to these giants, just plain creepy.  Ginger chose to illustrate how these towers and their lines insinuate themselves into our lives by creating a photographic collage (in a mild red tone for added effect) of childhood photos of she and her sister, Else.  There is the basic collage, but superimposed over that is the ominous visage of power lines and one of the towering giants.  Ginger tells us that as a child, she found the towers fascinating and wanted to climb the one behind their home.  As an adult, she now knows that there is a great deal of research on these very towers and the lines they support. While they still look appealing, her focus now is researching their potential damage to humans with the hope of writing a book on the subject.  Hopefully, this collage, too, will be included in the Inglewood Open Studios tour on Novemer 13th & 14th, 2010. 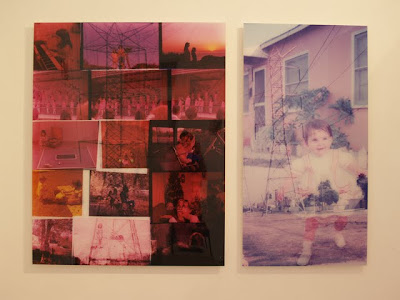 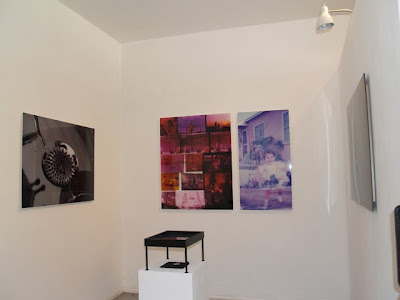 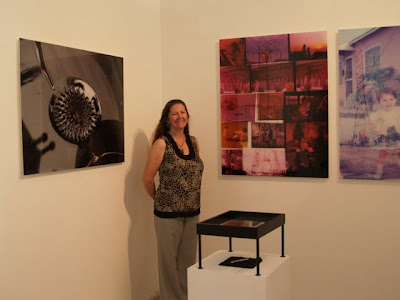 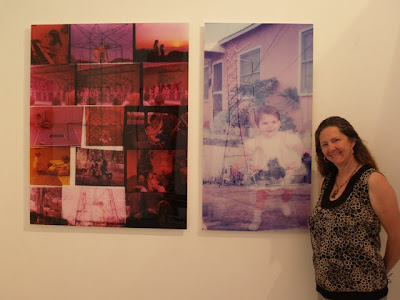 Ginger Van Hook stands beside the images that make up a memoir of her sister Else.
All in all, I was very glad to have seen this exhibit.  It was a refreshing change from a traditional showing and the science is fascinating.  One has to love an artist’s brain.  We think so far out of the box that an exhibit like this becomes exactly what was hoped for – a visual representation of how we work.  The gallery provided Professor Shimojo’s notes on each segment and notes by the artist’s on their segments.  Together, one has a clearer picture (no pun intended) of what was seen.


Posted by Ginger Van Hook at 1:37 PM No comments:

Edward Ewell is Featured Artist at the Inglewood Public Library! 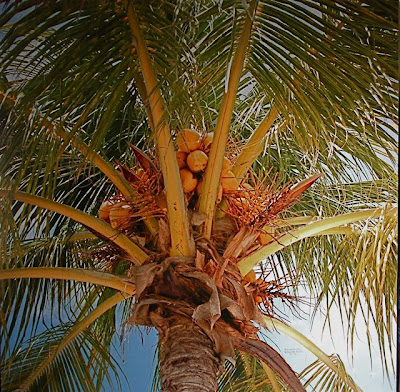 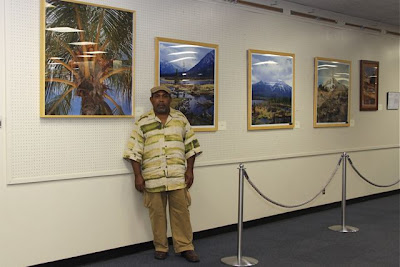 Edward Ewell Exhibits his Photographic work at Inglewood Library in August, 2010.
Every month, Inglewood Public Library features a new artist to exhibit work on the long wall of the first floor as one enters the book section (look over to your right). For the month of August, Edward Ewell is displaying an array of stunning landscapes that transport you right into the streams, the mountains and even into a lively coconut tree. Do visit the library for a view of these beautiful images of a paradise in which exist a meditative quality of spiritual ambitions and emotions. Edward Ewell treats the canvas of his photographs with respect and reverence and follows his heart to bring this exhibition to bear. 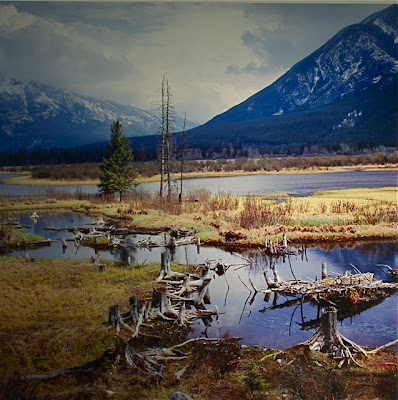 Mr. Ewell tells us that "The photographic images displayed here in the Library are part of a series of photographs titled 'Photographic Expressons of Praise.'  This series was started some 25 years ago.  The title derives from two points.  First, my thankfulness and praise to God for allowing me the opportunity to see his creations, and secondly, to see not just the physical, but also the spiritual and emotional aspect of His creations and being able to copy what I see and feel.  God being the very first of all artists, for all of this I give Praise through the lens." 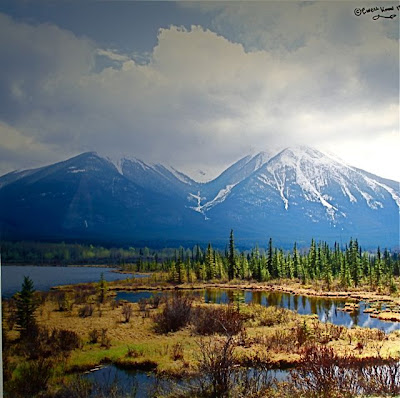 Edward L. Ewell was born and educated in Los Angeles.  During his military tour of duty in Southeast Asia, he became interested in photography.  He purchased his first camera and began photographing the landscape and people in their various conditions. 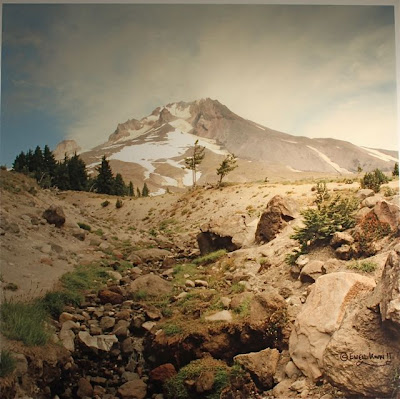 Realizing that the images he captured left impressions on those who viewed them, he decided after the military to continue to develop his photographic skills.  Taking courses in photography and attending various workshops and seminars, he completed a college degree.
Posted by Ginger Van Hook at 7:56 AM 1 comment: